Last week a missile landed on a farm in the Polish countryside. Two people were reportedly killed, and the rocket that killed them was reported to be Russian. Immediately the media machine in the West began to churn, and perhaps without meaning to brought the World a step closer to the next and last World War. That the story was wrong – false at first, and faked after the fact – made little difference to its dangerous amplification.

Alfred de Zayas is a law professor at the Geneva School of Diplomacy whose lengthy career in the service of human rights law includes twenty five years at the United Nations as a staff member, special rapporteur, and after “retirement” a six year stint as Independent Expert on International Order to the UN.

Alfred’s many essays appear online at Truthout and CounterPunch, where I found his recent article, ‘Peace as a Human Right‘ on the topic of “25 Principles of International Order to Ensure Sustainable Peace”. 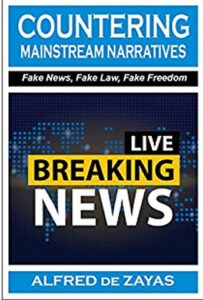 Alfred de Zayas and building another Order for the World.

Chris Cook hosts Gorilla Radio, broad/webcasting since 1999. Check out the Archive at Gorilla-Radio.com, GRadio.Substack.com, and the GR blog at: http://gorillaradioblog.blogspot.com/